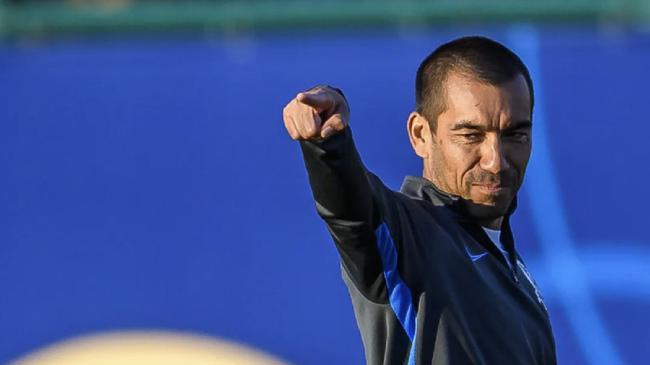 In the past few games, R&F has changed a lot. Careful people will find that Van Bronckhorst will change the formation and even adjust the formation during the game.

Fan Shuai used the three-center defender system in some of the games, and Li Songyi was re-used in terms of employment. He partnered with foreign aid Tosic and Jiang Jihong to form a three-center defender. Yiteng, which was used more frequently at the beginning of the season, has played for many games. Not in the starting list, Fan Shuai hopes to adjust the personnel to stimulate the enthusiasm of the players, change the formation, etc., making it more difficult for the opponent to defend.

Zahavi is gone, it does have an impact on the team. Fan Shuai hopes to use the strength of other players to form the strength of the team, and the team's performance is becoming more and more integrated.

The match with Evergrande began. R&F was getting better and better and almost drew with Evergrande. The following game defeated Jianye and drew with Suning. The FA Cup eliminated Shanghai Shenhua, and then the Dalian native was killed at the last moment of the league. The outside joked that R&F is "sufficient and loses the horse and knows the wrong." Zahavi is gone, but the team is more like a team.

"Many people think that we are not capable of reaching the top 8 in the Super League. When we first came here, the goal set by the team was to go all out in every game, unite, and enjoy the fun of football as much as possible. , It’s okay.” Van Bronckhorst said, “We worked hard one after another without putting too much psychological burden and pressure on the players’ performance. Of course, I believe we absolutely have such ambitions and a firmness. I believe that everyone will go all out and redouble their efforts to give full play to their strengths in the final game to help the team achieve such a goal."

In the course of the past few rounds, R&F players have shown to the outside world that the more difficult it is, the more it will inspire the team's fighting spirit. "Zahavi is indeed a strong, very good and excellent player, but everyone also knows that football is a team sport. In football, the team is the most important. Now we have proved that no matter who we play and who doesn’t On the field, as long as we are on the court as a team, fighting together and fighting together, we have the ability to win every game", said R&F foreign aid Dembele.

In the match against Dalian, Guangzhou R&F added two wounded men. Foreign aid Dembele was replaced by Li Tixiang due to injury in the 51st minute. Li Tixiang, who came on the bench, injured his hand in the 88th minute and was stretched. Carried out of the field for treatment.

Dembele was diagnosed with discomfort in the adductor muscles of the left thigh, and there is no major problem. At the pre-match press conference yesterday, Fan Shuai said that Dembele's injury has improved a bit and has not yet decided whether to let him appear in this round. "It still depends on his situation before the game tomorrow and how he feels personally before making the final decision."

And Dembele himself has a positive attitude towards the four: "We play with an attitude of full victories in every game. Maybe this season we have shown some slowness, but as the game gets more and more played The more we get, the better our condition. If we want to achieve better results and get the top four, every game is very important, and we also want to continue to prove ourselves, play our own football and win these games. victory."

As for Li Tixiang, his hand injury was initially diagnosed as fractures of the second and third metacarpal bones of his right hand. R&F Football Club quickly contacted the hospital for Li Tixiang, and the players have been arranged by the club to fly to Beijing for treatment. R&F coach Fan Shuai hopes that Li Tixiang can catch up with the second stage of the game.

The match against Shenhua on September 24 was the third time that Guangzhou R&F played against the same opponent this season. The first match was in the league, R&F defeated Shenhua 3-2. The second game was the Football Association Cup last week. R&F tied the score at the last minute and finally eliminated Shenhua with a penalty kick. R&F has beaten Shenhua twice this season.

For R&F, two victories against Shenhua have accumulated confidence.

"Shanghai Shenhua performed quite well. They are a very strong team. But we also have such confidence. We also proved our strength in the first half. We have this ability to defeat them. Why not? We took out our strength and our best state, hoping to defeat this opponent again." R&F foreign aid Dembele said.

Fan Shuai introduced: "The last two games of the first stage of the league are very critical to us, because Shenhua has the hope of hitting the top 4, and so do we. It is a game not to be missed for both sides. The momentum of the team has been relatively good recently. , I was able to qualify in the FA Cup, and then I won on Monday. The two days of training focused on recovery and adjustment, to ensure that the players’ physical condition is at their best."

"Although we have defeated Shenhua twice this season, tomorrow is a brand new game and a tough game, so we have to make full preparations, like the previous game, with faith and high morale to fight against" Van Bronckho Steer said, "We have played vigorously in the last two games and played a very good team spirit. I think that every step closer to the goal will greatly improve self-confidence, which is very important for the team. I hope they continue to carry this kind of attitude. Confidence, face the next two games, and we will play the next games as finals."

It was Huang Zhengyu who followed Fan Shuai to the pre-match press conference, which means that he will start the match against Shenhua. Huang Zhengyu, who basically appeared in the midfielder position this season, performed quite stable and was the first barrier to the team's defense. "The two days are mainly about recovery. The schedule is very intensive, I hope everyone can clenched their teeth and stick to the next game."

Although the results of the game against Shenhua before this season were good, R&F players did not dare to take it lightly. "Although we won the first two games (the FA Cup is a penalty shootout), we still have to stay focused and hope for a good result tomorrow."