A controversial scene at the last moment of last night, At the last moment between SIPG and Chongqing, Shi Ke made a grab and Feng Jin fell to the ground in the penalty area. After the referee Li Haixin communicated with the video referee Zhang Lei, he determined that there was no foul or penalty. Through slow motion, the penalty should be based on Shi Ke's kick. People usually know that kicking the ball from behind is mostly foul, but Feng Jin did not completely control the ball. When Shi Ke stretched his foot from behind, Feng Jin had already stretched his left foot to the front of the ball and might be ready to pull the ball behind him. At this moment, the ball exposed the body's control range, and Shi Ke also steals from behind at this time. Many people said that it was Zhang Lei again, and SIPG’s VAR actually hammered the scene. In fact, I personally feel that it is not a big problem if this ball does not blow a penalty. 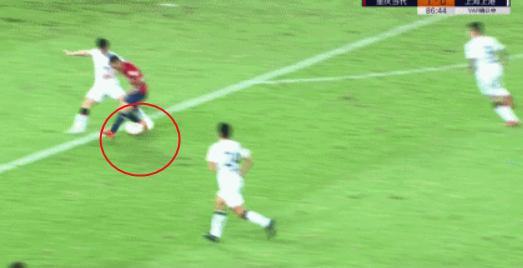