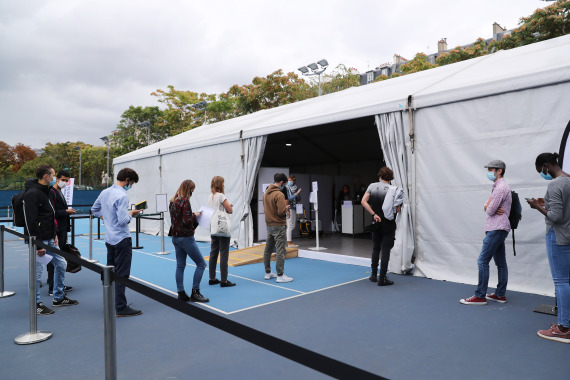 Xinhua News Agency, Paris, September 26 (Reporter Xiao Yazhuo) The arrival of the French Open in 2020 is rare in autumn. The Roland Garros Stadium in the western suburbs of Paris is a familiar clay holy ground for players, but it has become a little strange because of the epidemic.

Data from the French health department on the 24th showed that there were 16,096 new cases in the country in the past 24 hours, a record high since the outbreak, and the number of new cases on the 25th continued to remain above 15,000. French Minister of Health, Verand, has repeatedly stated that "the epidemic situation has become more severe."

In response to the epidemic, the government announced a number of measures, among which restrictions on the number of people in large gatherings directly affected the French Open.

Earlier this month, the French Open Organizing Committee also optimistically estimated that the site can accommodate 11,500 people per day to watch the game. However, as the epidemic worsened, the organizing committee was forced to reduce the upper limit of the audience to 5,000 on the 17th. And as the French government announced on the 23rd that the number of large-scale gatherings in Paris and its surrounding areas should not exceed 1,000, French Prime Minister Castel made it clear in an interview with the media on the 24th that the French Open will not be an exception. This year Roland Garros’ daily The number of spectators on site was eventually limited to 1,000.

"There are only 1,000 spectators. Obviously this is not the ideal situation, but I still have to thank the organizing committee." "King of clay" Nadal said at the pre-match press conference.

"Everyone hopes that everything is back on track, but before that, there is a more important thing to control the epidemic. At least, now the season has restarted and the game has finally resumed. This is the result of everyone's hard work." Say.

In order to successfully hold the competition, the French Open Organizing Committee has indeed made a lot of efforts.

Players must undergo the new crown test as soon as they arrive in Paris, and the second test 72 hours later. After the game starts, players will be tested again every 5 days. Spanish veteran Verdasco was forced to withdraw from the French Open because of a positive nucleic acid test before the game.

In addition, the organizing committee also stipulates that all participating players must stay in two designated hotels during the event, even players who have a residence in Paris, there is no exception.

"This is really different from the past. I have a place to live here, and I am very used to living at home, but this year is different." Said Serena Williams, who has an apartment in Paris. But she said that she understood the decision of the organizing committee, "Under the current circumstances, I think such a decision is necessary."

Except for players, all other registered personnel, including staff and media reporters, also need to undergo nucleic acid testing. Only those with negative test results can enter the venue, and each test result can only be valid within 7 days. This means that if a reporter wants to cover the entire French Open, it needs to be tested twice, and if it starts to report from the qualifying match, it needs to be tested three times.

Before the start of the game, the reporter also received an epidemic prevention guide from the organizing committee, with a total of more than 30 pages. In addition, there was a separate document on how to conduct nucleic acid testing, which also had more than 10 pages.

After entering the game, the most conspicuous thing is the ubiquitous hand sanitizer. The reporter washed his hands 3 times from entering the stadium gate to sitting in the media workshop. If you want to enter the media stands in the stadium, you have to add one more time.

In order to further reduce the risk, media reporters are not allowed to have direct contact with the players during the entire game, and all press conferences are changed to online. So there was this scene: the players were sitting in separate rooms and had a conversation with reporters sitting in the next room through video connections.

"It's too cold here and it's raining." This is the most spoken word of the players since they came to Paris.

In the past, the French Open was held from the end of May to the beginning of June. Although it was often affected by rain, the temperature was higher. This year's game was postponed for 4 months, and Paris has entered autumn. The weather forecast shows that there will be rainfall in the first three days after the race starts, and the daily maximum temperature is only about 15 degrees Celsius, and it may even drop below 10 degrees Celsius at night.

Such weather conditions may bring extra challenges to the players.

Winning favorite Nadal admitted frankly that this may be the "most difficult" French Open in his career. Nadal, who has won 19 Grand Slam titles before, is expected to tie Federer's record of 20 Grand Slam titles in this year's French Open. It is worth mentioning that in the French Open, Nadal has won 12 championships and won 93 games. Since there are exactly 7 games from the first round to the final, this means that if Nadal can win the championship. , That final will also be his 100th victory in the French Open.

New Co-US Open champion Tim and Nadal are in the same half-zone. In the French Open finals of the past two seasons, the Austrian player fell under Nadal's photography. This year, with the strong confidence just built from the US Open, Tim naturally hopes to make a breakthrough. Djokovic, now ranked number one in the world, is also one of the candidates for the championship. The Serbian star is in excellent form this year, with 31 wins and 1 loss in all competitions and successfully won the Italian Open that just ended. In this French Open, he will attack his 18th Grand Slam title.

On the women's side, the American player Serena Williams is undoubtedly the most watched. She has won 23 Grand Slam titles before and celebrated her 39th birthday on the 26th. This time at the French Open, her goal is to tie the Australian legend Margaret Court's record of winning 24 Grand Slam titles.

Different seasons, different environments, and can an unusual French Open bring the same excitement to the audience? We will wait and see for the next two weeks. (Finish)