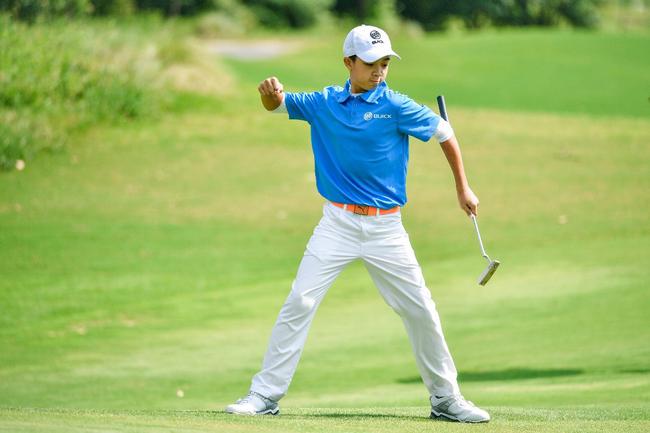 On September 24th, the sky was beautiful and the autumn sun was sent to welcome the birth of the two champions of the Buick China Junior Golf Championship Group B. The second round of the finals can be said to be extremely thrilling. The improved weather provided favorable conditions for the players' good performance, and the intensity of the competition also increased. The men's and women's group B is only one stroke away, and the championship is officially released!

The leading group in Men's Group B in this round delivered a very impressive result. The first-round tie leader Chang Hee-hwan won four birdies in the first nine holes. The round ended with 68 and won the championship with a one-shot advantage. "I played well on the last nine holes of the stadium today. It's a pity that I didn't seize the chance at the last hole, but I am still very excited to win the championship." Due to the epidemic, he would have participated in more than a dozen games every year. Chang Xihuan has only participated in five games so far this year, and maintaining his form has become an important issue for him this year. "There are relatively few games this year. I didn't prepare enough for the first game, and I didn't play well. So as long as I finish my homework at home, I will hurry up to practice. Recently, my state has slowly returned."

Zhou Yanhan is the best player in the men’s division of this round. He won five birdies on the last nine holes, especially the two birdies on the last three holes, and almost forced Chang Xihuan into the playoff. "Today I came for the championship, so I played more aggressively. When I knew that Chang Hee-hwan had bogeyed on the 15th hole, I thought if I birdied the last three holes You can play the extra hole.” Zhou Yanhan won the second place in the first two races this year. It is a pity that the finals failed to win the championship. "This game still made me discover a lot of deficiencies, including putting up and mentality to improve, I hope to go further next time."

This round of women’s group B competition is equally fierce. In the first round, Wang Xinyu and Mabeca, who ranked second and third in the leaderboard, launched a strong impact on the championship. Wang Xinyu took the lead with three birdies on the four holes before the start. "I have not won a championship against Buick in these years, so I came with the determination to win this game!"

Double-winner Mabeka started from Wang Xinyu's second group, and the first nine also delivered a good result of -2. "Today I played well. The greens on this course are difficult, so I will try my best to make every shot."

Wang Xinyu entered the final hole with a one-shot lead. But in the closing hole, she regretted bogey (bogey), and the two had the same results. Although the game has ended, she chose to stay on the green and wait for the arrival of Mabeca. "I was on the green at the time. When I saw that Mabeka's Papa putt was not advancing, I felt very complicated. Although I was very excited to win Buick's first championship, I felt that the last nine holes failed to perform at a normal level. In fact, I should have played better." Wang Xinyu, who was runner-up in Guangdong Station, finally achieved a breakthrough in the finals. He won the cup with one shot and tasted the championship. "In order to play this game well, my dad and I went to practice cut push one month in advance. In this game, I feel a lot more stable."

The men’s and women’s A group continued their second round of competition today. Although the men’s first-round leader Zhou Ziqin and the women’s leader Chen Yulin were impacted by the chasers, they both maintained a one-shot advantage and entered the third tomorrow. wheel.

Advanced, have the courage to face difficulties,

To win the championship, you must have a sense of advancement,

On the way of growing up, no matter what difficulties he encounters, he is determined to keep going up, and keep moving forward on the way to the championship. Tomorrow, the third round of Group A, Moving Day, who can rush to the leading group, we look forward to it together!